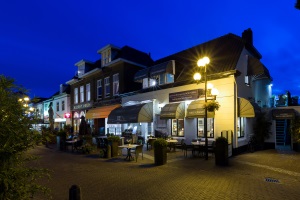 On Wednesday the 17th of november 1999 Ton and Ellen Freriks opened the restaurant De Vier Seizoenen.
The 17th century  building in the heart of the village of Lisse was first used as the mayor's residence till the end of the 19th century. Since then it has had many different destinations. The principal form has remained intact, the ”shopfront” is typical for the nineteenth century style. It is one of the most characteristic buildings on the Heereweg.

In April 2004 the restaurant was extended with the conservatory and a huge patio terrace with covered veranda.
From May 2014 a Bed and Breakfast is planned with four modern and romantic rooms with  en suite bathrooms. These rooms are situated on the first floor and are to be reached via  separate stairs next to the restaurant.