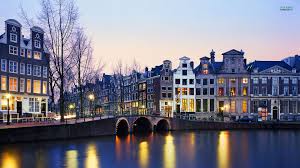 Amsterdam is blessed with many art treasuries. The inner city alone already has almost 7,000 monuments from the Dutch Golden Age, Amsterdam's ultimate flourishing period. Furthermore there are the world famous musea such as the Rijksmuseum, the Stedelijk Museum, the Hermitage of Amsterdam, the Van Gogh Museum and many other art collections. The city also features a large number of open-air markets, beautiful squares, the Jordaan and its vibrant and diverse nightlife. In this multicultural world city with the warm charm of a village there is always something going on.

Amsterdam has so many sights that it would be impossible to name them all. Worth mentioning are    the Allard Pierson Museum with its valuable archaeological discoveries, Madame Tussaud's, the Canal house Museum and of course the Anne Frank Huis. Some other top sights are the Nieuwe Kerk, the Vondelpark, the Scheepvaartmuseum and the Grachtengordel. So much to choose from!

There is always something going on in upbeat Amsterdam. The Holland Festival (performing arts), the City Marathon, the Gay Pride ( local LGBT parade of boats), the Uitmarkt (three-day event at the start of the cultural season) and the Parade may surprise you each year. At the Jordaan Festival you can dance to the music of well-known live bands. Every five years Amsterdam organizes Sail, one of the largest maritime events in the world. And for those who love classical music there is the Grachtenfestival. During this five-day festival, you can enjoy classical music in unique locations such as gardens or “hofjes”(ancient courtyards), monuments or private houses.

Many tour boats cross the canals. You can embark at many different places for a tour along special, ancient canal houses ( some of them can be visited on the inside). If you choose a canal bike you determine your own tempo and may see even more of the city. Amsterdam also has a zoo: Artis, Holland's most famous and oldest zoo with animals from all over the world.